Natural Approach for Children with Migraines

Previous Next
Natural Approach for Children with Migraines 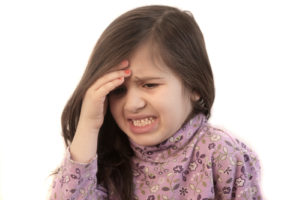 Kids Get Migraines too!

A recent story on ABC news reported about children suffering with migraines. Often we think of migraines as something that only affects adults, but research reports say that migraines in childhood probably occur more than you think.

The story was about Jacob Holladay, a 12 year old, who was suffering through the fifth day of a severe head pain. The episode was so bad that he got admitted to Children’s Hospital Los Angeles.

“It generates from my right and left temple but mostly my left one,” said Holladay.

His mom says he’s been out of school for a week, and he missed two weeks in January as well.

How long Jacob’s migraines last makes him a bit unusual, but pediatric neurologists say child migraines are quite common. Studies show migraines occur in 5 percent of children under 10 and in 10 percent of teens and preteens.

The story goes on to say, “kids with migraines often grow up to become adults with migraine. That’s why experts say learning to prevent them and find ways to manage them early will help keep them under control.”

To learn more about the connection between head and neck injuries and migraine headaches, download our complimentary e-book NATURAL AND DRUG-FREE WAYS TO END YOUR MIGRAINES by clicking the image below.

Getting to the Cause of Migraines

Unfortunately, the story did not discuss the most recent research regarding migraines. Science is now revealing that migraines are likely caused by changes in blood and cerebrospinal fluid flow to and from the brain as a result of a misalignment in the upper neck. These misalignments are commonly caused by accidents that produce previously undetected injuries to the upper neck. These misalignments are capable of being corrected.

Few clinics have been trained to provide these specialized procedures. Fortunately, one of the clinics is within your own community. The state-of-the-art care provided at our clinic has given many children and adults their lives back, including many with migraine headaches. And the upper cervical procedure is safe, gentle and extremely effective.

Dr. Kurt Sherwood, D.C. is an Upper Cervical Specialist and Renton Chiropractor who has helped many people to find natural relief over the past 20 plus years. He is trained by the National Upper Cervical Chiropractic Association and his Renton Chiropractic clinic specializes in correcting problems in the upper cervical spine (upper neck). This vital area is intimately connected to the central nervous system and problems in this area have been shown to be an underlying cause of a variety of different health problems including migraine headaches, multiple sclerosis, fibromyalgia, Parkinson’s disease, and vertigo. More information can be found on his website at https://www.restorationspinalcare.com