Finding Out What Is Behind Meniere’s Disease

Previous Next
Finding Out What Is Behind Meniere’s Disease

Most people have heard of Meniere’s disease, but because it is so rare, few understand what it really is. What causes this mysterious condition? Is there any way to care for it that works effectively?

Meniere’s disease is defined as a disorder of the vestibular system accompanied by such symptoms as:

Previous thinking pointed toward fluid build-up in the inner ear (referred to as hydrops) as the cause of Meniere’s disease. This is considered to be a condition that occurs with no known cause and is diagnosed by ruling out other health conditions that may be contributing to the symptoms.

Since Meniere’s disease has symptoms that relate to the vestibular system it makes sense that medical doctors would look to the ear for answers. However, it has been discovered that there is a different problem in the body that is causing fluid to build-up in the ear. This has to do with a misalignment in the upper bones of the neck that may have been the end result of a car accident that caused whiplash or another injury to the head and neck.

To learn more about the connection between head and neck injuries and vertigo, download our complimentary e-book HOW TO NATURALLY RELIEVE VERTIGO WITHOUT DRUGS by clicking the image below. 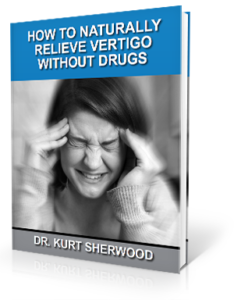 This connection was never made before because it can take many years for the symptoms of Meniere’s disease to develop; sometimes as long as 15 or more years. This is because, in the long run, the injuries cause a lesion that negatively affects the eustachian tubes and possibly the trigeminal ganglion (leading to trigeminal neuralgia).

Finding the root cause of a problem is the key to being able to correct it. In this situation, if Meniere’s is being caused by a misalignment of the upper neck, then correcting the problem can lead to a resolution of or, at the least, a decrease in symptoms of the problem. Here at Sherwood Spinal Care, we use a gentle method of upper cervical chiropractic called NUCCA to help the bones realign naturally. Patients have reported success in coping with their Meniere’s through this method of care.